What is GDI Fuel Injection

Not too long ago, gasoline direct injection (GDI) was reserved for a few luxury and sports cars. However, over time this technology has become more affordable. Matter of fact, according to the US Department of Energy (DOE), Gasoline Direct Injection was the most widely adopted emerging technology in the car industry during 2018. Nowadays, that trend shows no signs of slowing down.

Why is that? What makes GDI so special?

In this article, we will explore what is behind car makers’ excitement surrounding gasoline direct injection.

What is gasoline direct injection (GDI)?

As its name implies, DI engines’ injectors deliver fuel straight into the combustion chamber. This is a huge change from Multiport Injection (MPI) where fuel injectors spray gasoline into the intake manifold.

Changing fuel injectors’ location may seem not very important, but the truth is that it makes a world of difference. As you will learn, GDI technology brings many benefits ranging from better fuel economy to smaller engine designs.

How do GDI injectors work?

The logic behind GDI injectors is the same as any other Electronic Fuel Injection (EFI) system. The Electronic Control Unit (ECU) gathers information from all powertrain sensors, calculates the optimal air-fuel ratio based on the vehicle’s driving conditions and activate DI injectors to deliver the required amount of fuel.

From a mechanical perspective, most GDI injectors use special “needle valve” solenoids since they require faster response times than MPI injectors. DI injectors are also sturdier than conventional injectors since they have to withstand higher fuel pressure and the extreme combustion chamber temperature. 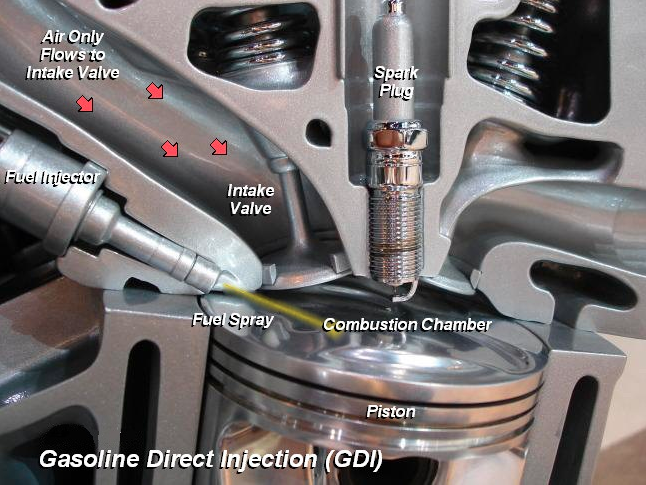 What are the benefits of GDI over Multiport injection?

Knowing how GDI injectors work is interesting but you may wonder, how can this technology benefit me? Does it bring any tangible improvement over Multiport injection? In short, is it worth choosing a direct-injected vehicle over an MPI-based one?

Below is a list describing the main benefits of GDI over Multiport injection.

As you can see, gasoline direct injection systems are worth all the hype surrounding them. However, that doesn’t mean they are perfect.

What are the disadvantages of DI over Multiport injection?

Hopefully, by now you have a clear idea of what are the pros of GDI over MPI injection. But what about direct injection disadvantages? This article would not be complete without an overview of its weaknesses.

Gasoline direct injection is here to stay. The benefits of DI systems clearly outweigh its drawbacks. DI advantages over former MPI systems are too many to ignore. Newer vehicles fitted with direct injection are more efficient in every aspect. As time passes you can expect direct-injection costs to decrease and issues like carbon buildup solved.