The hesitation usually comes from bad timing or bad accelerator pump, sometimes points, We do check the pump to make sure there is a good squirt before it goes out and that the only thing I can think for him to check. Look through the venturi and manually accelerate while car is off, should have a nice little straight stream of fuel right off the start and then it cuts off.
This hole feeds the distributor advance. 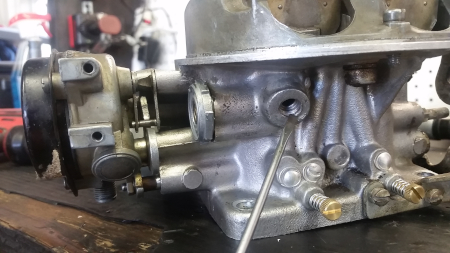 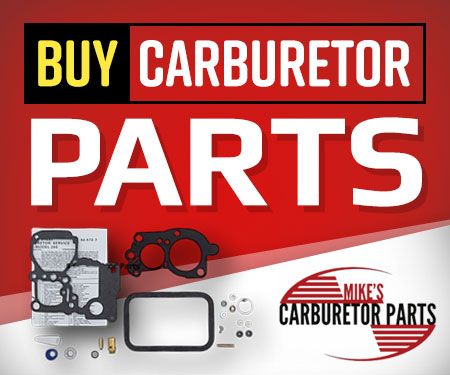 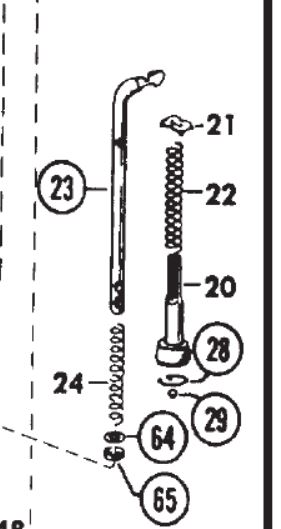 The accelerator pump has a delayer spring that goes over the stem (20), then the retainer (21). The arm #23 slips into the accelerator pump slot above the retainer. The retainer can be replaced by a washer, but you need to figure out a way to keep the pump and spring from sliding around.
The Holley 4000 has 2 idle mixture screws. Only 1 seems to make a difference in RPM when adjusted.
Most likely culprit is warpage in the "boot" on the front of the bowl casting. As the back of it lifts up with the passage of time, the idle circuits and the power valve diaphragm circuit are interrupted. It could also be warpage in the bowl lid since that is where the idle air bleeds are located IIRC.
Of course, it could also be a blocked idle passage, a vacuum leak on that mixture screw's primary bore,
a missing "boot" gasket or improper bowl installation; hard to say without seeing it.

Secondary Problem
Would you please look at the attached photo and advise if the gasket is the correct one and if it is fitted correctly. I can not see that the vacuum would be sufficient as part of the channel seems to be open to air. I made a new gasket which covered the open part of the channel and the vacuum operates. However when I connect the operating lever to the butterfly shaft it will not operate the secondary flaps. It appears that something is making the secondary flaps difficult to open, even with hand assistance. 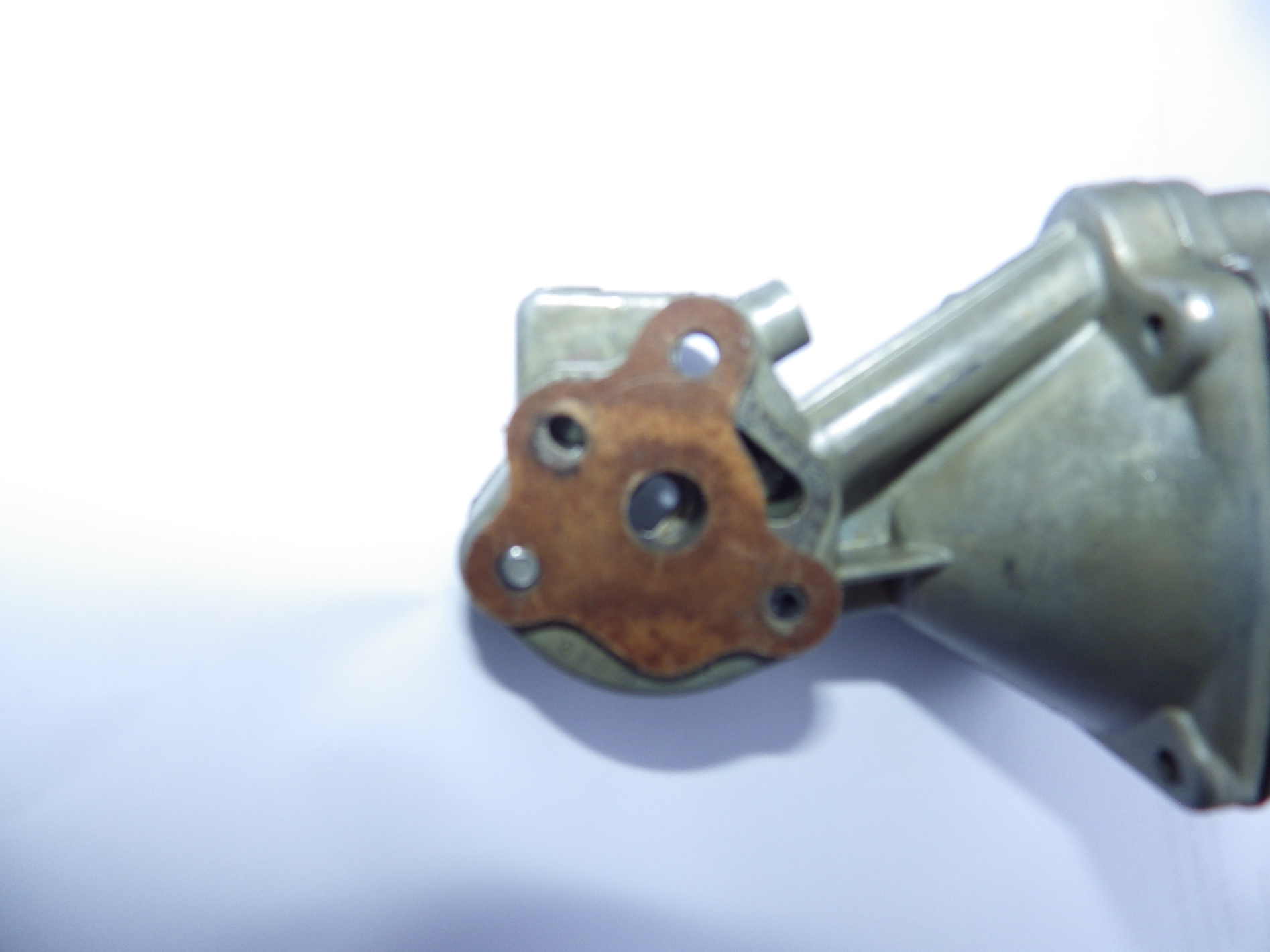 The gasket is correct; it has simply been installed incorrectly. Tell him to line up the holes in the gasket with the four holes in the base casting, then install the secondary vacuum main body. Only after the main body has been installed should the diaphragm be loaded into it and clipped to the little secondary lever.
The slot in the bottom of that secondary casting is there for a reason: with the steel cover plate in place, it allows a small instrument ti be inserted to prevent the sec. lever from moving while the spring & diaphragm cover are installed, thereby pre-loading the diaphragm correctly. Tell him to be sure that the large check ball and its keeper are in the sec. casting's vacuum channel as well; this is very important.
Not sure I understand his comment regarding the secondary "operation lever". The purpose of that linkage between the primary and secondary levers is to close to the secondaries, not to open them; the diaphragm spring takes care of the closing chore entirely. The linkage should be adjusted so that it just closes the secondaries completely when the primaries close completely (fast idle cam disengaged, curb idle screw backed completely out).

Red Nylon Check Ball
The small red plastic checkball goes under the small brass screw located in a hole on the bottom of the base. This is part of the spark vacuum control system.
Also, make sure that the vacuum advance restriction jet (a tiny brass jet) is installed beneath the spark control valve.
Float Bowl Empties Gas
The problem is that if the car is started each day, it will start immediately, almost on the first crank. The car runs, idles and performs very well. However, if the car sits for three-four days, it must crank for some 30 seconds or more before it will start. We have removed the top of carb and found that after three/four days the fuel bowl fuel level is way down.
Actually, Mike, this is easy: it's not the carb, it's the fuel pump. Failing fuel pumps which are draining back into the tank through faulty valves or back through a faulty diaphragm into the crankcase (cringe!) will empty a carburetor bowl in as little as a day or less.
Tell the customer to disconnect the fuel pump, then wait 3-4 days and check the fuel level in the bowl --- betcha it will be full.
Then tell him to send his pump to The Old Carb Doctor for restoration. It will cost $210 + shipping to restore his dual-action fuel pump.
The old spark valve is longer than the new one.
The one on the right is a newer design and works the same.
Do you have a replacement for the spring that fits under the float on a Holley 4000?
Sorry we do not, but while it would be nice to have it isn't critical. It is used for float bounce so as long as you stay on good roads, no problem.
I am rebuilding a Holley 4000 Carb from a 1956 Ford Thunderbird. I have two issues. I can not remove the Pump Discharge Weight and the two Main Discharge Jets from the float bowl body after dipping in Berryman's carb cleaning dip and spraying with a spray carb cleanner. Any recommendations for for freeing them up or is it OK to leave them and continue with the rebuild? The second problem is that the small arm that sticks out to the side of the main discharge jets came off as I tried to pull them out. Will the carb function without them?
You can apply heat around the outside of the parts. That usually gets them loose. If you can't get them out, be sure you can blow air through them then leave it alone.They should be cleaned.
If you are referring to the main discharge nozzles, then yes they need to be there. The small arm that sticks out the side is where the fuel comes out. If it is long enough to get the fuel into the bore, then it will probably be OK.These are very hard to remove without breaking. If you can't get then out, be sure you can blow air through them then leave it alone.
Unfortunately the main discharge tubes are not available and there are a lot of variations depending on which carburetor you have.
Are the 'pump rod lubricator washer and seal' available?
The felt lubricator is available here, Felt Pump Rod Lubricator
From a rebuilder: There is, or was, a tiny thin steel washer above the felt seal. Problem: most of those washers are now missing and I don't know where you would get one to replace it. Moreover, I'm not sure why it needs the seal and washer in the first place. I don't try to replace them; instead, I lube up the polished pump shaft with some Lubriplate No. 105 assembly grease from NAPA and send 'em out seal-less. I would suggest that your customer do the same. Even if he finds a new washer there is a very great likelihood that the shaft will get into a bind with the felt upon assembly.
Have to Prime Gas to Get it Started
I have to pour a bit of gas into the carburetor to get it started.

Is the choke closed (when cold)? If not then adjust, or replace the thermostat.
The carburetor could be boiling over (percolating). This happens when the engine gets hot and you turn it off. The gas having a lower boiling point these days, will boil and evaporate, causing the float bowl to dry. Make sure the gas lines are away from the manifold, try other brands of gas, run a 2nd fuel line back to the carburetor to help cool the gas.
Some have gone as far as added an electric fuel pump which they use only before starting to fill up the float bowl.
Test the fuel pump. Check your auto manual for the correct pressure. If the vehicle runs OK after starting, then this is most likely not the problem.
Can't find what you need? Contact Us
TOP