Rochester B, BC, BV Problems & Solutions
Below you will find questions that users have asked about the Rochester 1 barrel carburetor. The questions are followed by our best guess answer. We say best guess, because we don't have the carburetor in front of us and users often leave out important information.

I just re-built my carb (Rochester BC) and the rebuild kit did not have one of these.
It is running horrible now, after reading some of your posts, I'm wondering if it is dirt in one of the passages. The car seems to be getting fuel but not enough air. I'm guessing its getting the fuel because it backfires, but when I press on the gas it doesn't want to go.
2)Another problem: there is a pause when I first start accelerating before the car will go at all, what could that be?
3) The float had liquid in it, so I switched it for another float that I had. that one had a dent in it. could that be a problem, should I get a new float?
Thanks for your help
The throttle bushing is used on the throttle shaft and are generally not included in any kit. When the throttle shaft gets worn and leaks vacuum, then the best solution is to install bushings. This isn't for the novice machinist. It requires careful reaming, or drilling with both ends of the throttle shaft bushings lining up.
If you aren't sure about tackling this sort of job, then take it to a machine shop. They can usually do it.

Backfiring can be caused from lack of fuel also.
Minor dents and dings in a float are ok, but if you have a major dent, then replace the float. Floats are designed for use up a certain amount of volume. A big dent would change this.

Not a good idea. Perhaps you can adapt something so that it is vented at all times, but keeps the gas from splashing out. Do this until you can find a parts carburetor.
When I stomp on the accelerator, the engine hesitates.
Your problem is either the distributor advance not advancing, or the accelerator pump circuit has a problem. I will only address the possible carburetor problem.

Incorrect check ball placement. See above to determine which goes where.

Put some fluid in the pump well and press down on the pump. Fluid should come out of the main discharge hole.

The main discharge uses the biggest steel ball, then the spring, then the T.
What the accelerator pump assembly looks like 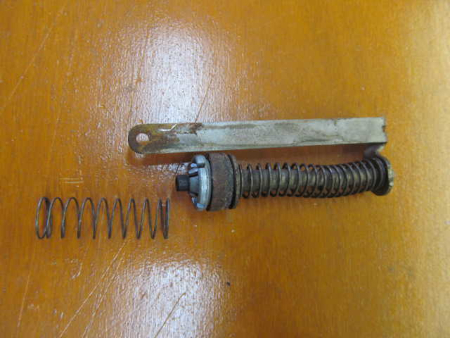 This is the round shaft type of Rochester B accelerator pump assembly. The return spring 66-15 goes in the well 1st. The delayer spring 67-3 (trim to size) goes over the shaft. The bracket is next, then a retainer clip, which can be a simple C clip. holds it together.

Also of note is that this is a leather pump and will need to be replaced with a complete pump. You won't find this in many of the 1 barrels, but does comes along once in a while. Kits only include a rubber replacement cup which will not work on this pump.

To replace the pump measure the overall length and compare with our 2 different pumps.

Not feeding fuel from float bowl?? 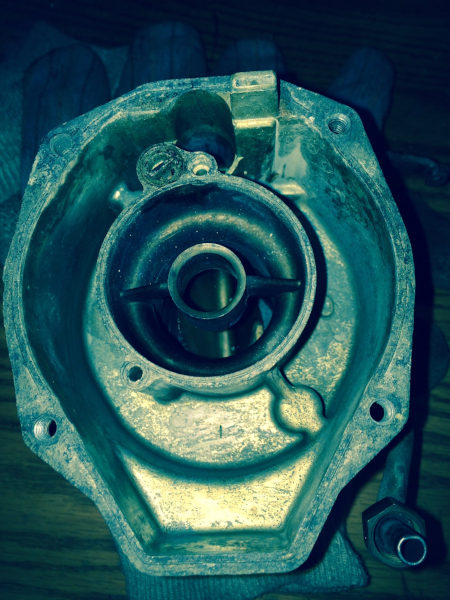 Customer discovered that the main jet was plugged. Obviously there wasn't going to be fuel going anywhere.
As I was adjusting the idle, I noticed there seemed to be gas seeping out through the gasket between the bowl and the air horn. I’m thinking that 1) I screwed up somehow or 2) the gasket is intended to swell and seal itself once in use or 3) my adjustment to the float was wrong and it’s not shutting the needle valve soon enough (i.e. the bowl gets too full.). There is no fuel leaking out of the idle vent valve so I take that to mean that the needle valve IS actually closing.
The Rochester B is prone to leak when the body is warped. If you have the equipment you can put it in a jig and heat it up so straighten it out.

A last ditch effort would be to put 2 gaskets on the float bowl. That will sometimes do it.
Throttle Shaft

Well because of the video I found that the peening of the shaft is factory. Who would think?

Another method would be to braze the end.

Lack of Power on High End
Could be a weak fuel pump - test the pressure and compare with the specifications in your motor manual. Around 4 lbs.
Power piston not working correctly.
In the power cap there should be a check ball with a spring on top.
Make sure the power piston moves up and down without restriction.
There should be a return spring under the power piston.
Power Piston Stuck
Heat up the area outside the power piston. It will come loose with enough heat.
Died when on a hill
I was driving my truck up a very steep hill, and half way up it started losing power and stalled. I pumped the gas pedal a few times, started it up again, and made it the rest of the way no problem. What do you think the issue is here? I was thinking maybe the float needs adjustment? Going on the flat or down hill it runs great otherwise.

Could be a couple of things.

The 1 barrel body might be warped, which is common these days. They are too old. Fuel might be dumping over into the carburetor bore temporally flooding it.

The float level may be off enough that when on a hill it makes a difference.

Our experience with the 1 barrel would point to the 1st option.

Carburetor Floods When Stopping, Turning, or on a Hill

This is most likely caused from a warped float bowl as almost all of the Rochester B's are.

This allows fuel to slosh over from the float bowl into the bore when stopping, turning, or going up a steep hill.
Can you tell me what size ball goes at the bottom of the power piston on a Rochester B? Trying to replace one that is missing.
Correct size ball for that position is 5/32" (or .156"). Small spring goes in brass "cap" below ball.
Whey Does My Rochester 1 Barrel Flood?
I get this question asked almost on a daily basis. When a carburetor floods it's all about too much fuel getting into the carburetor.

Some of the things causing too much fuel to enter the carburetor.

1. Bad float, or float adjustment bad. Test the float by heating up some water and immersing the float. Any bubbles indicates a leak.
2. Needle & Seat not sealing. Turn the top upside down so that the float rests on the needle. Blow gently into the fuel inlet. You should not be able to blow by the needle & seat. Keep in mind that blowing over 4 - 4.5 lbs will cause the needle to open.
3. Fuel pump pressure. Should test 4 - 4.5 lbs. Higher pressure will force the needle open, letting gas go by. New fuel pumps are especially suspect. If all else fails add a regulator between the pump and the carburetor.
4. Dirty carburetor. Pull the top off of the carburetor. Any dirt, or corrosion at the bottom of the bowl indicates a dirty carburetor. Clean & rebuild the carburetor.
5. Power piston may be frozen, allowing fuel to flow through even at idle. You should be able to move the piston up and down freely.
6. Check ball, or spring may be missing from the power cap. The small check ball, then spring goes in the hole before screwing in the retainer screw.

Watch the video below for tips on what to look for when your carburetor is flooding.
Gas leaking down the accelerator pump stem (flat stem type)
There is no seal that seals the stem from the float bowl and that is where the fuel is coming from. Don't let this continue as it is a fire hazard.
Most likely the carburetor is warped allowing gas to splash out of the float bowl. That can be corrected if you can build the jigs for this to heat and squeeze the parts. Not an easy process.
It's also possible you are flooding. With a flooding situation, there would be too much fuel in the bowl. Flooding - is the exhaust burning black? Are the plugs burning black? Is there a strong fuel smell coming from the engine?
Choke valve doesn't open completely
The piston does not use any o-rings and is used only for the choke pull-down. Slightly opens the valve when cold and hitting the throttle. This keeps it from over choking.
You have another problem.
The valve should open fully when hot and throttle has been opened once. Sometimes the throttle can keep the choke from opening after warming up.
Stove pipe - should be connected to exhaust manifold. Check tube to see if it is getting hot.
There is a vacuum source that pulls hot air into the choke housing. This is located where the housing is mounted. It doesn't take much vacuum.
Possibly the valve is sticking. Disconnect the linkage and feel the choke valve for any catching.
The thermostat might be bad. Try using a hair dryer on the thermostat cover. If the valve opens, then it isn't the thermostat.
Replacement carburetor for the Rochester B
Carburetor pops when stepping on the gas. Pump sticks.
With the sticking pump, I would look there 1st.
Was the original pump a round stem pump with a leather cup? If that was the case, then you should have replaced the entire pump. You can't replace the leather with a rubber cup.
Apply 2 drops of white lithium grease to the rubber cup.
Check the cup to make sure it isn't rolling up.
Is there a return spring under the pump?
Disconnect the linkage and try the pump disconnected to eliminate the linkage.
When testing the pump keep in mind that it will get tight toward the bottom of the well. They are usually tapered.
It's possible the cup got contaminated with some chemical in the gas. Be sure you don't use any WD40 around your carburetor.
Popping
Spark Plugs Black & Sooty
The carburetor is too rich.
Don't jump to conclusions and start changing main jets, especially if it was running OK at one time. Jets don't wear out, or change over time. The only time you should blame the jets is if you installed a different carburetor.
Can't find what you need? Contact Us
TOP