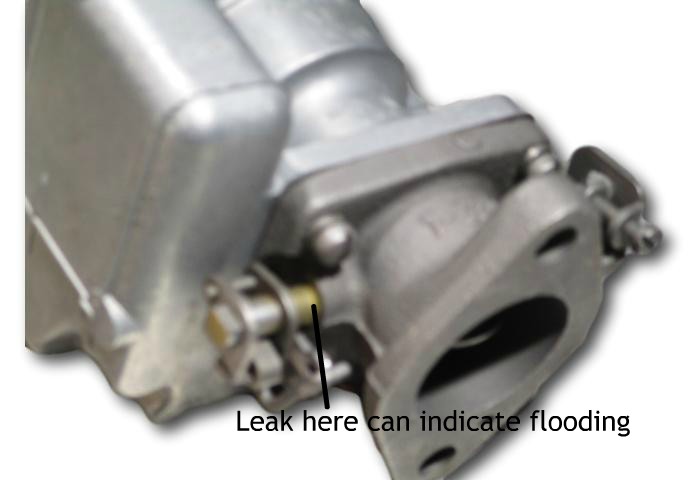 Posted by Mike on 1/14/2020 to Rochester B
What is Flooding?
So what does it mean when a carburetor is flooding.
Flooding is when there is so much gas getting into the carburetor it is flowing over the top, running out of the throttle shaft, or perhaps a vent tube. Whatever is the least resistance that is where the gas will go.
Very dangerous because so many engines and cars burn up because of a gas leak, or flooding. All the gas has to do is touch a spark and off it goes.
Which reminds me, anytime you are working on your engine be sure to have a fire extinguisher close by.
A story about that.
A customer spent years restoring his GTO and the 1st time he took it out for a trial spin, the carburetor flooded over and caught fire. Well, guess what? He didn't have a fire extinguisher, or anything else to put the fire out. He had to stand there and watch his car burn. It made me sick just hearing about it.
When I talked to this customer he was just getting done with the 2nd restoration and was calling me for a carburetor kit. The carburetor was the last thing he had to finish the car.
Back to flooding.
There are several things that can cause flooding. I will address each.

The 1st thing most people want to do when their carb is flooding is change the float setting. Unless the float is hugely off, that isn't the problem. At least as far as the setting goes. Set your float to specifications and leave it there. Fudging the float setting is covering up the real problem.

Now the float could be causing the flooding. It might have a hole, or crack allowing it to fill up with gas. That makes it too heavy and will keep the needle open.
To test your brass or plastic float, heat up water just prior to boiling and immerse the float in the water. The inside of the float will heat up and expand forcing air out of any hole or crack. The smallest hole will show bubbles in the water.
A Nitrophyl float is solid and the only way to test them is to weigh it with a gram scale. Every float has a different weight.
Move the float up and down to feel any catches. The float pin could be worn. Also make sure the float isn't rubbing on the side of the float bowl. The Autolite 4300 and Rochester Monojet is especially guilty of this happening because the float fills up the float bowl so much.
The most common cause of flooding is dirt in the needle & seat. 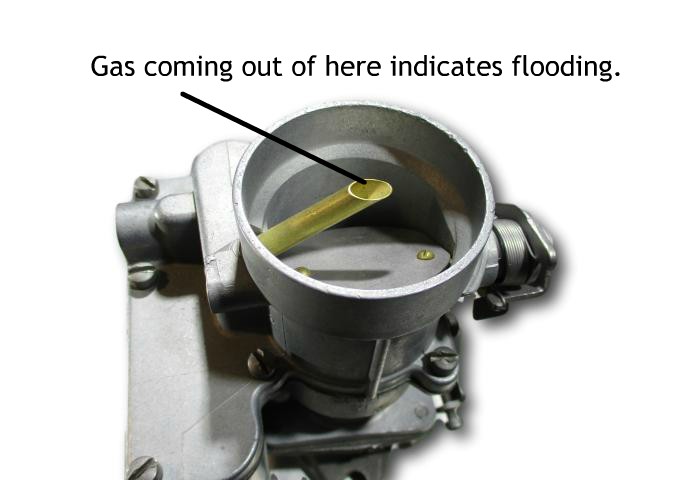 What happens often is you clean your carburetor, then start the engine. Dirt from a dirty gas tank, or in the fuel line rushes up and into the carburetor. So if your gas tank has been is use for many years, consider taking it off and giving it a good cleaning. Most rebuilds that are returned as defective are found to have dirt in the bottom of the float bowl. Eastwood has a good tank cleaner and sealer.
Note: Even with a fuel filter you can get dirt up to the carburetor. Filters can't be so restrictive that they cut off the gas supply.
Another thing to think about when it come to the needle & seat. Any pressure on the needle (viton tip) while adjusting the float can damage the tip and gas can leak by the needle.
Make sure all of the old gasket has been removed under the seat.
The fuel pump is another possibility. If you have an electric pump be sure to have a regulator installed between the pump and the carburetor. Set it fo 4-5 lbs as per your motors manual.
New fuel pumps are especially suspect. It isn't unusual to have them pumping at 20 lbs of pressure.
Has your vehicle been sitting for 3 or more months? The gas may have turned and coated the inside of the carburetor. You will usually smell varnish when this happens.
We recommend you use Ethanol Defense in all of your engines. This will help keep ethanol from damaging your parts.
So, as you can see flooding can be caused by multiple conditions. You just need to take one at a time and work through them. Seldom does a carburetor problem blamed on any ONE thing.
How Do You Start A Car That Was Flooding?
Previous Post
Next Post
Item In Cart

Hi, I have a question about a merc carb that I rebuilt with a kit I got from you. The engine is running rich, excessive exhaust at idle and the engine surges in the mid-range RPM. Mid to top RPM it runs smooth. Under warm idle, I can see fuel dripping from the Venturi’s. More info. After the rebuild, I completely drained my fuel tank of ETOH-fuel and replaced the fuel-H20 filter before testing and using the carb post rebuild. Only using non ETOH fuel. Any ideas why the dripping at idle and surging in the mid range RPM. Thanks.

Yes, take a look at the trouble shooting page here, 4th section down https://www.carburetor-parts.com/Mercarb-Marine-Troubleshooting_ep_482.html Thanks