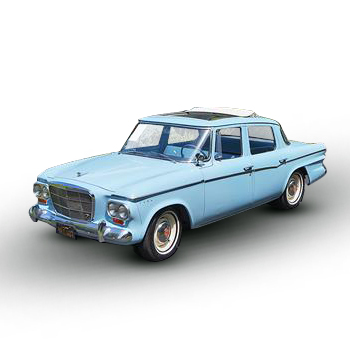 The Lark was introduced in 1959 as a Compact Car, following in the footsteps of the first in this American car class, the 1950 Nash Rambler. According to the Encyclopedia of American Automobiles, the Lark was the model that was supposed to save Studebaker, and was tooled and into production in a remarkably short ten months time. By 1958 Lark-based models dominated the company's production, with only a minor representation by the sportier Hawk and limited production Avanti.

Lark was interestingly novel to the industry in several ways. First and foremost, while it entered in the increasingly popular Compact category, it achieved this size in a way that bucked the industry styling trend of a longer hood and shorter rear deck. Lark achieved its characteristically stocky appearance with a shortened overhang at both front and rear, in sharp contrast to the longer, lower look. With this arrangement the car appeared to be smaller than it actually was, incorporating far more interior comfort and space than seemed possible due to its having been designed around the body shell of the larger Studebaker models of 1953-58.

First released in the fall of 1958 (as a '59), the original base model Lark 6 Deluxe Series 59S 4-door Sedan had a flathead six cylinder engine displacing just under 170 c.i. with a single downdraft Carter carburetor. Although overhead valves were finally introduced in 1961, this engine and carburetor combination was utilized largely unchanged through 1962, with various permutations of the Carter-AS carburetor in both of Lark's Deluxe and Regal trim levels.

With an original base price of $1,821, the Lark sedan was an instant success, selling over 26,000 vehicles. The hardtop version with a 259 c.i. V-8 and a dual downdraft Stromberg carburetor did not sell quite as well, but the stage was set for Lark's illustrious career as Studebaker's last big seller before the company's collapse in 1966.

Sedan, hardtop, and station wagon models were offered in the first year of production, and by 1960 a convertible was added to the lineup. Also in 1960 the 6 and 8 designations indicating engine size were changed to Roman Numerals, and additional model names began to appear:  the 1960 DeLuxe Series S60 Pelham and the 1961 Regal Series 61S Cruiser.

Gradually, the Lark name was relegated to less and less importance, and was dropped altogether by 1964 in favor of designations Cruiser, Challenger, Commander, and Daytona.

Toward the end Studebaker was buying some Chevrolet engines in an attempt to cut costs while continuing to offer a wide variety of choices to the consumer. The most notable of these was Chevy's famous 283 V-8 with a dual downdraft Rochester carburetor. By 1964 the company offered two sixes and three V-8s, but this variety was not enough to save the company from its inevitable demise. That same year, U.S. production in South Bend Indiana was terminated and transferred to its Canadian plant that had been in operation since 1915. The Lark and its offshoots sold fairly well, but by that time it was too little and too late to save America's oldest surviving automaker (1902-1966).