Question:
Have 65 mustang w/ 2100 carb. Floods so bad car will not run watched your video on rebuild and order a new float... Is this the way you would go?

*If you have a black nitrophyl float, then by all means replace it. For brass, heat up a pan of water just prior to boiling. Immerse the float. Any crack, or hole will show up with bubbles.
*Check the fuel pump pressure. Compare with specifications from your engine manual. New pumps are especially suspect.
*Check the needle & seat - look under the seat and make sure there isn't an extra washer, or residue under the gasket. Oh and yes, did you remember to put a gasket under the seat. Make sure it isn't cracked.
*Gently hold down the needle into the seat and blow into the inlet hole. Air should not get through. The needle has a viton tip and is easily damaged if you put any pressure on it while adjusting the float level.
*Check the float level.
*Make sure the float isn't rubbing on anything. It could be catching on the red rubber check valve. Cut the stem off if it is catching.
Runs Bad Over 1/2 Throttle
Question:
The engine bangs out really bad as if it's not getting enough fuel. I don't know the history on this engine, it has been rebuilt, not sure if the cam in stock, it does have headers on it. Is it possible that I need even larger mains?
Answer:
A new ignition control module fixed it!!
What Does The Float Spring Do?
Question:
I have a damper spring on my float pivot rod. Currently it is oriented with the short side under the float hinge and the long side against the back of the float bowl (behind the needle) ...in effect putting slight up pressure on the float. The spring is in its natural state, i.e. not wound around giving more tension. Is this correct?
Answer:
The spring is used to keep the float from bouncing. A small amount of tension is desirable. If it is flopping around then wind it one turn. From what you describe you have it in the right position.
Vent Tube
Question:
Where can I get the vent tubes and how do I replace them?
Answer:
The tubes can be found here:
These tubes are pressed in. You should be able to move the tubes back and forth while pulling on them. You can also drill them out, just be careful not to drill too large. Install by tapping them in gently.

In general:
Vents are used so that the float bowl doesn't create a vacuum and siphon gas.
Older carburetors simply vented the fuel bowl to the air. Later, the vent was routed back to the engine so that the gas fumes were burned (pollution control).
For the type that vented back to the engine, it can be left open with nothing connected.If gas comes out of the vent then you are flooding (too much gas) On some models the vent is opened and closed via a rubber stopper at the vent hole and it is opened and closed via the accelerator linkage. This type should work as designed.
How does the choke system work
Watch a video:

Power Valve Bad
My thoughts are they installed the power valve incorrectly. The newer power valves use a large gasket that fits into a grove a the edge of the power valve sealing surface. I hold the carburetor upright as I screw the power valve and gasket into the main body. This operation is complete when you see the gasket is securely seated into the grove on the lip of the power valve. If not seated correctly it will damage the gasket and the power valve will leak like it is ruptured!! The same thing will happen if they use the wrong gasket for the two different power valves with different sealing surfaces. The newer power valves use the perimeter thick gasket and the older ones use two different types. One gasket is thick and triangular on the inside ( probably the correct one for Ford 2100 &2150) and round on the outside. The other is thinner in thickness and diameter and has three or four tabs on the inside to keep centered on the power valve. (used more often on spark valve like the 1100 carb) You look at both older gaskets to see if they seal to the mating surface on the main body. Possibility that the venture cluster air bleeds are plugged. Remove the carb air horn then the cluster and blow out passages in main body and the cluster assembly, Don't forget to remove the pump discharge check ball and weight!! Maybe a bad power valve if installed correctly??
Red valve
Question:
I had gotten a 4008 kit from you for my 2100 autolite 2bbl. I was wondering which hole the little red plug goes into in the acc pump location. Mine has a center hole and one right under it..I think it goes in center hole.
Answer:
The red silicone rubber (inlet check) goes in the center hole of the main body. The other hole is the inlet for fuel to refill the accelerator pump cavity. After the pump discharges thru the squirt nozzle the lip of the red silicone check lifts and fuel refills the pump cavity. Caution when installing the rubber check by lubricating the stem or it might break!! Thanks JIM L
Power Valve Vent

Any gas coming out of this hole indicates a bad power valve, or the power valve gasket is damaged.
Fuel leaking out the bottom
Question:
When I pour gas in the fuel bowl in order to test the pump, all the fuel leaks out the bottom. Is that supposed to happen?
Answer:
*If the power valve was installed, it resided on the bottom. If it is installed, then it might be leaking. Hi, I have an Autolite 2100 that I have cleaned several times, all ports are clear yet at idle it always 'hunts' up and own in revs. The venturi's are seeping fuel into the chamber no matter how low I idle. Too low and it stalls. Iv'e tried a different Power valve but no different. Mixture screw need to be backed off quite a bit, more than usual. Any ideas. I tried a different Carby 2100D and it runs at idle okay but the 2100 will not idle properly as it 'hunts' up and down in revs consistent with the venturi's seeping into the chamber.
*If it’s seeping into the chamber it will never idle correctly. First of all you need to check float level and fuel pressure, your flooding over. Anytime it seeps down the venture’s that’s a flooding affect. Must check needle and seat also.
*Also check the main discharge. The large check ball should be there along with the check weight on top of it.
*Make sure the venturi gasket is correct and is laying down flat. They sometimes need to be trimmed.
Accelerator Pump Cover Leaks
Cover may be warped. Put it in a vise and heat it up. Squeeze so it becomes flat.
Float Bowl Runs Out of Gas When Sitting
Gas these days has a low boiling point and evaporates much quicker than it used to.
What is the felt gasket for?
That goes on the choke rod just underneath the top. The types that need this will have a clip under the top to hold this in place.
Springs for the choke pull-down
These are not available, however we do have two possible replacements, these were recommended by another rebuilder. We haven't tried them ourselves. 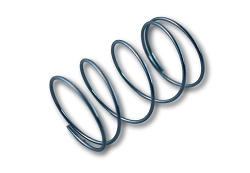 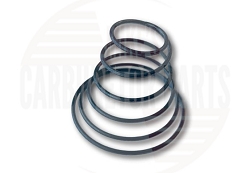 No Fuel Out Venturi
My motorcraft 2100 serial D2PF GB for a 1964 1/2 mustang 260 does not send gas from the venturi into the 2 barrel. When the venturi screw is removed there is gas when the accelerator pump is manually pumped. Also when screw is loose there is gas. Engine fires with starting fluid every time. I can't understand why it doesn't flow. Help! I love your helpful videos but I haven't found anything about this. Seems like some sort of adjustment.
Hard Starting after engine is warmed up.
If this was a problem before tinkering with the carburetor, then make sure the electrical system is in good shape. The carburetor is blamed for many problems when in fact the electrical system is most likely at fault.
Check to make sure the choke valve is open completely when warmed up. If it isn't opening, then the fuel mixture will be too rich for starting.
This could be due to gas leaking into the engine after the engine is turned off, or at idle.
At idle look down the carburetor and see if gas is dribbling out of the venturi. If so, then you have a main discharge problem. The 2100 used a check ball and check weight in the discharge. Be sure they are there. Check out this page on how the accelerator pump circuit works and how to test it: https://www.carburetor-parts.com/2100-Accelerator-Pump-Circuit_ep_1918.html
The check ball in the discharge may be leaking. Tap it lightly to form a good fit around the ball. Not too hard or you won't get it out.
Gas dribbling out of the venturi can also be caused by gas being siphoned as with the above. Non vented gas cap. Remove the cap and see if there is suction. If so, then the gas cap needs to be replace by a vented cap.
Is the vent on top of the float bowl open? It must be opened to the air, or in some cases a rubber hose ran back to the engine.
Hard starting can be caused by too much fuel when hot, or not enough. Is the fuel boiling out after turning the engine off.
One way to figure out if its too much fuel is to hold the throttle all the way to the floor when starting hot. That will introduce much more air to the mixture. If it start that way, then you know it's too much fuel.
Do not pump the gas when the engine is warm, or press on the gas pedal slightly.
Can't find what you need? Contact Us
TOP