My accelerator pump diaphragm leaks around the housing
These sometimes become warped and need to be made flat again. Place the housing between 2 flat metal stocks. Heat the housing with some pressure from a vise. Be careful not to melt the metal.
Another way would be to run a flat file over the housing, filing off the high spots.
Are the carburetor kit parts ethanol ready?
I am looking to purchase a Carter rebuild kit PK105. Are the materials in this kit compatible with ethanol-blended fuels?

Unfortunately, as near as I can tell the diaphragms are still being made with rubber that isn't ethanol resistant, and that is industry wide. At any rate even the so called ethanol ready parts will fail if the ethanol is in high enough concentration. This means the vehicle cannot sit for more than a week or so. Ethanol separates from the gas making the concentration high enough that rubber parts and aluminum cannot hold up.

One solution is to use Ethanol Defense in your gas. We have had very good feedback on this particular additive.

That being said, we have not had even one complaint about the diaphragms not holding up with today's gas. Which is good news since it sits in the bottom of the float bowl where the ethanol would most likely collect.
Plugs are fouling in 50 miles.
Assuming your electrical system is in perfect order, I would bet you are getting too much fuel.

This could be caused by the following:

Float level off, or perhaps leaking. Heat up some water just prior to boiling, immerse the float, any bubble indicates a leak.
Leaking around the seat. Make sure you installed the gasket under the seat. Check for any cracks, or perhaps the old gasket is still underneath. An problem here would allow the gas to bypass the needle & seat.
Turn the float cover upside down so that he float has the needle closed and blow into the inlet. You shouldn't be able to blow through (using about 5 lbs).
Run thin wire through all of the small passages. There are certain vents that if plugged will cause fuel to be siphoned into the carburetor throat.
Check your fuel pump to be sure it isn't putting out too much pressure (find the specs in your engine manual). New fuel pumps are especially suspect. Electric fuel pumps need a regulator installed.
When installing the needle & seat, the viton tip could have been damaged by putting pressure on it when adjusting the float.
Sometimes wiping the needle viton tip with mineral spirits will help. Just wipe until you don't get any black on the towel.
Test the main discharge to make sure it is sealing when not in use. It could be siphoning gas here if it isn't sealing.
Jets are probably not the problem unless they are a lot oversized.
If you have the black Nitrophyl type of float, then be sure to replace it. They tend to absorb over time (years). Once they get too heavy, they will start to sink and let too much fuel in.
Gas is coming out of the throttle shaft ends. Too much gas, Flooding.
This means that the carburetor is flooding and when this happens the gas runs down the carburetor and out the 1st place it can, which is the throttle shaft.

Some of the things to look for:
Check your fuel pump pressure and compare with what is in your motors manual. For the YF probably around 4 lbs.
The needle in the needle and seat may be damaged. This can happen when putting pressure on it when adjusting the float. Check the viton tip for any signs of scaring.
Wipe the needle viton tip off with mineral spirits. Wipe until you don't get any black.
Dirt may have gotten into the needle and seat. Blow out and re-try.
Gas could be coming in the bowl around the seat. Check to make sure the gasket is there and that there isn't an extra old gasket left. Check for any cracks in the bowl top.
Check the floats for leaks. Heat up some water and dip the float into the water. Any leaks will bubble.
Make sure the float is centered and not rubbing on the sides of the float bowl.
Move the float up & down by hand to see if it catches anywhere.
Check the float level to make sure it is correct.
Run thin wire down the idle tube to be sure it is clear.
Move the float up and down to see if you can feel any resistance. The float pin could be worn causing the float to hang up.
Check the main discharge. Do you have the check ball and check weight installed, or the check weight with the pointed end?
Dirt may have entered the carburetor after it was rebuilt. Make sure you have a good in line filter.

What is Flooding and How Do I Fix It?

The metering rod fits too loose in the main jet.
This is normal for the Carter YF & YFA. The metering rod does not fit tight. It is built to restrict a certain amount of fuel, not to shut if off.Carburetor runs rich at idle.

Among other things check the idle tube to make sure it is clear. Run thin wire down the hole to clear out any ethanol residue. See number 42 in the illustration. 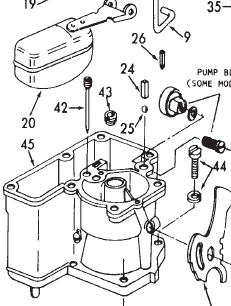 Whilst following your adjustment instructions and when carrying out the metering rod adjustment,can you tell me if I should disconnect the link pump connector first.

Fuel is dribbling out of the main discharge at idle.
This should not be happening. Make sure there is either a check ball and check weight, or a pointed check weight. Seat the check ball using a brass drift punch and tap lightly.
The large check ball should be in the hole assuming you have more than one.
Non vented gas cap can cause this. The tank will build up pressure and force fuel into the carburetor.
Plugged idle tube is another problem.
Does the YF use a fuel inlet fitting?
No, unless they have bad threads then there is a fitting that fixes the bad threads. Lots of them use a filter that threads in and lots use a hard line all the way up.
What is this hole?


This is the accelerator pump diaphragm drain. It returns excess pump discharge to the float bowl. Do not plug it off.

Idle Doesn't Kick Down When Coming to a Stop

With the exception of a vacuum leak, the idle is affected by the throttle valve being open. What you need to do is figure out what is making the valve stay open.

After Shutting Down Engine is Hard To Start
There are a myriad of things that can cause this.
Here are a few ideas for you to look at:
Only runs when the choke valve is wide open
This would have to be when the engine is cold because when warmed up, the valve should be open.
So assuming it is cold:
This tells me that when the choke valve is closed there is too much gas being pulled into the engine.
Loss of power on the high end
I purchased and installed the rebuild kit I received from you for my YF2100S carburetor. It is mounted on a 1946 Chevy truck with an in-line 6. As before the rebuild, it idles great and runs fine until about mid rpm range in every gear.  Beyond that however the engine starts to spit and sputter.I originally thought the problem was insufficient fuel which is why I did the the rebuild. Post rebuild, and with no noticeable change in symptoms, I pulled a plug (all new) and found them to be black with soot buildup. So now I’m thinking to much fuel when the throttle is beyond mid-point.I have disassembled the top of the carb and all appears to be in order. The metering rod seems to be in place. There is no evidence of gas leaking on the outside of the carb. And, as mentioned above it idles fine and runs good to mid range.A compression test has all 6 cylinders within 10% of each other averaging 115 psi.
The black plugs suggest flooding, or too rich.
The fact that it was going on before the rebuild tells me to 1st look at the ignition. Bad plugs can cause high end loss of power for sure. Same with wires.
Once you know the ignition is OK then start looking into the carburetor.
By chance if this carburetor was transplanted before this all started then the problem may be the carburetor main jet is too big.
Did you test the float when rebuilding? Heat up water just prior to boiling and immerse the float. Any bubbles means it's leaking.
Gently move the float up and down to see if you can feel any catching. The float pin could be worn. Also the float should be aligned in the middle.
Make sure the  choke valve is wide open when the engine is warmed up.
Check for proper adjustment of the metering rod. If it isn't coming up far enough it would restrict the fuel.
Look in our YF carburetor manual and go over the metering rod adjustment.
Follow the main jet passageway to make sure it is clear. I've seen crud build up below the jet causing a restriction.
Test the fuel pump to make sure it isn't too low. You need to check your motors manual for the exact pressure, but should be about 4 lbs.
Can't find what you need? Contact Us
TOP