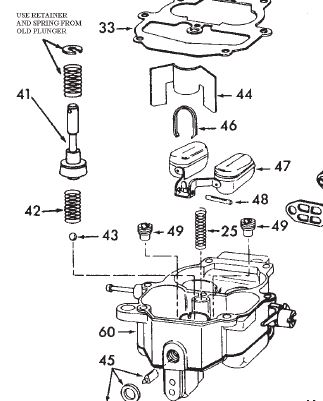 Gas is flooding over the top.

Bottom line is that you are getting too much fuel in the float bowl.
Can be caused by the following (could be other causes not mentioned).
Gas Boils Out After Turning Engine Off

This is called percolation. The float bowl top vent is used to relieve the fuel vapors from the float bowl, otherwise the vapors enter the carburetor bore causing a rich condition. Hard starting can also occur. The vent should open when the throttle is at idle position.

This is not the only reason for percolation. The engine may be getting too hot, gas has a lower boiling point that it used to. Try different brands and grades of fuel. Make sure fuel lines are away from the manifold. Run a 2nd line back to the gas tank which will help cool the gas. Add an electric fuel pump and use just before starting to re-fill the fuel bowl.
Coughs, or hesitates when stepping on the gas

Accelerator pump service may be in order if the engine stalls or hesitates accelerating at low speeds. A good tip to remember is that if an engine at operating temperature coughs through the carburetor and the air horn appears sooty, the mixture is probably too lean. An over-rich mixture could cause the engine to lag or hesitate but it normally won't cough.