This is where we post questions from customers along with our possible solution. I say possible because without having the carburetor in front of me and know the history of the vehicle and carburetor, I have to assume certain things.
What is the hole behind the fuel bowl for?
That hole is the relief hole for the accelerator pump. This hole is used to vent the accelerator pump when it is filling up for the next time. There is no fuel in the back of the pump, so any fluid coming out of the hole indicates a bad accelerator pump.
Do not plug this hole off.
The vacuum hole in the base is covered up. 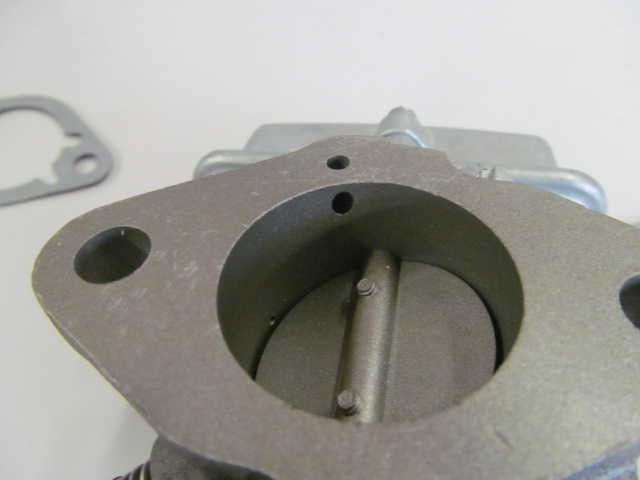 As you can see there is also a hole inside the bore that leads to the other hole. When the hole on the flange is covered vacuum is fed from inside the bore. This is as expected.

This vacuum hole leads up through the carburetor and out the connection for the distributor advance tube.
Overflow Fuel
After rebuild My carb is puking gas out of the overflow. I have removed and cleaned blown out seat ,checked needle looks fine, verified float was not leaking (sinking) not rubbing on side,leveled the float.

I figured it out the, There was a burr on the face of the seat body that would not allow the copper gasket to seal. Filed it flat and its fine.

Another Flooding Situation
I got this rebuilt Holley 1904 carburetor with order #28223 in August 2014. The truck has been driven about 1,200 miles since the rebuilt carb was installed. The truck had an electric fuel pump a Fram inline fuel filter and an Offy fuel pressure regulator set to 3 psi. Last weekend I removed and replaced the electric fuel pump with an original style mechanical fuel pump. Retained the pressure regulator and cut the pressure to 2 1/2 psi.
I made this change because fuel had been overflowing out tge vent in the top of the carb and running down the manifolds. After the fuel pump switch, the truck started and ran - and fuel promptly overflowed the bowl and again ran down the manifolds.

1st of all I think you need more than 2 1/2 lbs of fuel pressure, but that isn't your problem.

You are flooding (getting too much fuel in the float bowl).

This can be caused by several things.

Damage from ethanol if it sat around a lot.

Gas turning to varnish from sitting, coating the inside of the carburetor.

Fuel may be leaking around the needle & seat into the float bowl. Some kits use a metal washer on the seat which doesn't always seal well. Treat the washer with Permatex Anarobic.

The biggest problem with carburetors these days is the lousy gas, sitting around a lot and the ethanol.

I would try to blow a little air into the fuel inlet to see if you can dislodge any dirt that may have gotten into the carburetor.

Thank you! Blowing air in the fuel inlet seems to have stopped the flooding. Turned the pressure regulator up to 3 psi also.

Vacuum Ports
The vacuum port on the top of the carburetor body near the fuel inlet is for the distributor advance.
The port in the throttle body is for the spark valve. Not all Holley 1904 carburetors have this.
Higher Elevation
I have a 1904 with an electric fuel pump on my 1942 Willy’s MB Jeep. Seems to work fine driving on streets and highways. The Jeep looses power, acting like it’s running out of gas, when I take it off road 4 wheeling. The Jeep will stall and takes a bit to get started again. When it does start back up it puts out a lot of black smoke out of the exhaust. I love at 5000’ in elevation and go off roading up to 7,500’. Above 7000’ the Jeep runs very rough and dies frequently. I’ve made adjustments to the air-fuel adjustment screw with only minor improvements to the jeeps operation. Looking for some help:) Thanks, Tim

This would be the normal reaction when going up to high elevation. The jet is probably jetted for lower elevation and when getting up to 7,000 too much fuel is being passed.One possibility is that the jets are metered for sea level, which would have been the default. At 5,000 we would reduce the jet size by .002. Perhaps that has never been done. I would suspect that a jet for 5,000 would also work at 7,000.If we had the carburetor number we might be able to find the sea level size, otherwise it's a guess.At 5,000 watch your plugs. They should burn tan, or gray. Dark brown or black means they need to be reduced by .002.Adjusting the idle mixture has no affect other than for idle.
Loss of Power on acceleration
I purchased a Holly 1904 carburetor kit from you. I received the kit. Disassembled the carburetor, cleaned, and installed new kit. The engine is a 223" in a 1956 Ford f100 pickup. I tuned the carb., timed engine. It idles good, runs well. I shift through 1st, 2nd. Pulls strong. But once into 3rd gear after engine is up to operating temps. Under load, with pedal to the floor, it loses power and shudders. Let off and ease throttle,it runs okay until full throttle under load. I've checked mechanical fuel pressure and it is putting out 4p.s.i.,checked coil and switched to a known good one, still the same results, checked intake manifold for leaks, none to note. It acts in this manner only when hot, in 3rd gear under load, flat ground or up an incline. I've checked and adjusted air fuel with a vacuum gauge. I'm not sure what I'm missing. Any ideas for me to check? Much appreciated.
First thing that comes mind is the power circuit. Make sure the economizer diaphragm stem isn't bent to the side of the power jet stem and is the stem straight. With low vacuum, or at high speed the economizer stem is down which pushes on the stem and allows extra fuel in.
Did you put a file across the economizer block to make sure it is flat? Any warpage will cause fuel to leak by and back into the bowl.
Is the float level with the carburetor upside down?
Doesn't Run Unless Choke is Closed
This can be caused by a vacuum leak, or starving for fuel.
Vacuum leak - Spray carburetor spray cleaner around the mounting, intake and any other vacuum source. If the RPM changes you found the problem.
Lack of Fuel - Float should be level with the carburetor turned upside down.
Look for kinks, or plugged fuel line.
Weak fuel pump- measure pressure. Should be about 4 lbs.
Plugged passage. If the problem is at idle, check the passage coming from the idle mixture screw.
Does Your Carburetor Have One of These? 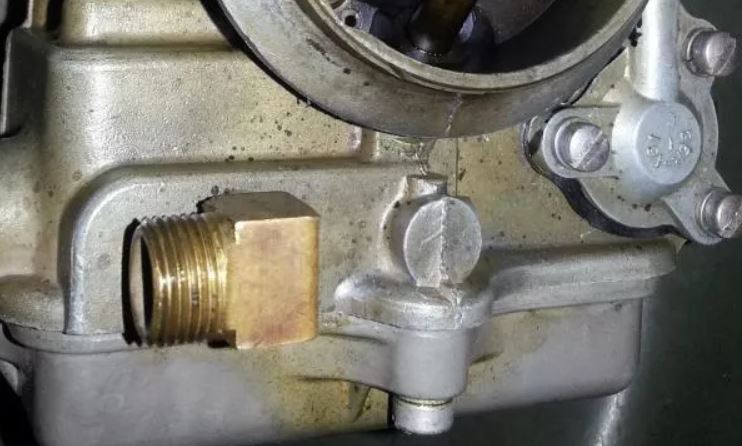 Connects to some air cleaners.
What are all the small passages for? 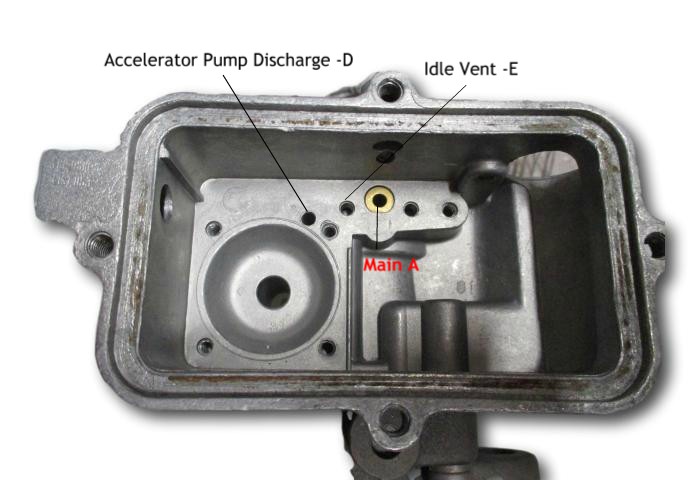 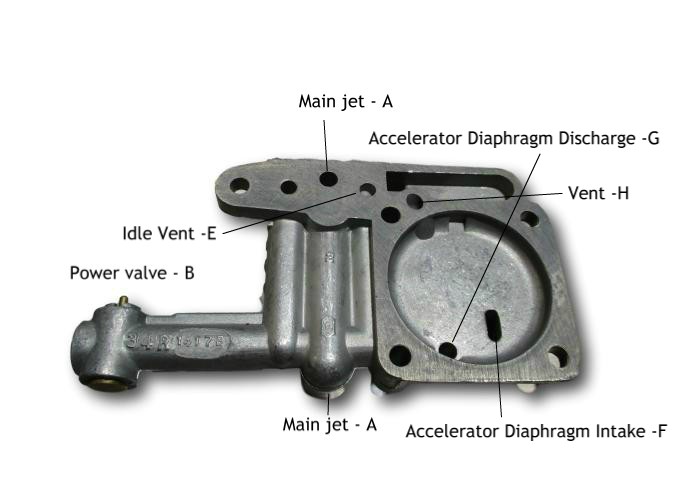 Won't Idle
First take care of the ignition system. People tend to blame the carburetor for any problem when the electrical should be the 1st thing to look at. Once the electrical system is good then look at the carburetor.
Check for vacuum leaks.
Check around the mounting gasket, throttle body, intake manifold and any vacuum lines coming from the carburetor, or intake manifold.
Check the throttle shaft for looseness. Spray some carburetor cleaner around the ends of the shaft. If the RPM smooths out, you found the problem.
Are you getting too much fuel at idle?
Determine if fuel is dribbling out of the main discharge at idle. That shouldn't be happening and is probably due to the discharge check ball not seating.
The needle & seat could be leaking. Treat the seat gaskets with Permatex Anarobic.
Remove the idle mixture screw and blow out the passage. Put a finger over the idle mixture hole in the bore and blow through the mixture hole. Is air coming out of the top?
Blocked passages might be caused by old fuel turning and coating the inside of the carburetor. A rebuild/cleaning would be called for.
Rebuilt My Carburetor But Still Floods
Aside from you doing something incorrectly there are a couple of ideas.
Did you test the fuel pump for proper pressure - about 4 lbs.
Is dirt getting into the carburetor. Many rebuilds go bad because the fuel filter, or tank is dirty and polluting the carburetor after it is cleaned.
Did you test the needle & seat to make sure it's sealing. The 1904 is notorious for leaking around the seat. See above for flooding comments.
Can't find what you need? Contact Us
TOP